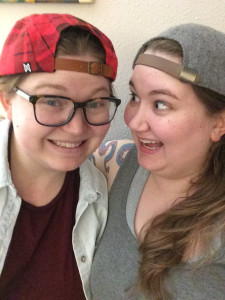 I'm going to marry her.

It wants its drama back. Girl. What are you doing? Stahp.

We've had a couple of false alarms at work re: Ebola. We had a patient come in a couple of weeks ago saying they knew/had contact with Thomas Eric Duncan. So after notifying my director and receiving over the phone training (Which included the following- "See those gowns by the micro door? Don't use those, those won't protect you. You need to go find a surgical gown." Because it's great to have useless PPE out, right? Smh), it finally came out that this patient had simply been in the ER the same day as Duncan and the whole thing was a false alarm. But apparently down in the ED they didn't have the person in the correct isolation room and then they didn't put a sign out so one of the ER techs went in to do an EKG without any PPE on.

Seriously, we would have been on the news for failure and mishandling of the whole situation.

I did finally get my PPE training. It was terrible. The whole process of putting on the outfit takes like 20 minutes and it's insanely hot. You're wearing an N95 face mask, knee high booties, an outer helmet/bib thing made of rubber, a surgical gown, a surgical hair cap, two pairs of globes and you can't wear glasses. So I was blind, it was sweltering hot, and I hate being confined like that anyways so it was miserable. Once I finally got everything off, I firmly told the lab manager (AKA Dolores Umbridge) that I was categorically never doing that again. And that I'd happily not do ebola testing to avoid it.

PLUSSSS they shouldn't be drawing blood on an Ebola patient anyways. All of those fluids should stay in that person's body. Really we should only be transferring them to the DFW holding center in Richardson. Mess.

In sad news, we did finally have to have Biscuit put down last week. But we used a home service, so the vet came out here to do it. It was actually really lovely, really calm, but obviously really sad. I'm glad he's not suffering anymore, but we really miss him a lot. He was such a gentle, sweet dog. (Odie has not been sad.)

Other than that, everything has been good. School is going well this term, and I'm going to the block party on Saturday. So I'm pretty stoked about that.

I have an interview on Friday for a PRN position at Baylor. But I still have another few weeks of training at TMCP (and after that I have training at Walnut Hill), so I'm not sure they'll want to hire me knowing they'll have to wait until April to train me. At the very least, once life calms down a little, I'll have already interviewed and if something else pops up I'll be able to take it.

The flip side of this is that my entire life revolves around lab science. I go to work for 8 hours, come home and study for a few hours and then go to bed and get up the next morning to do it all over again. And it's.... a little exhausting. But it's still better than the alternative where I got paid to watch TV all night.. right? (It is better, I'm just so sleepy. I'm not a morning person and getting to work everyday at 6AM is awful). I'm ready to switch to my assigned shift.

I finally switched over to blood bank on Monday (after spending a hectic 3 weeks in hematology. That department is a total clusterfuck of disorganization and haphazardness. It makes my brain hurt. Plus their procedure manuals are terrible. So I'll be reading one, and I have to stop and ask tons of questions.) and things are already about 800% better. I keep hoping we'll have a legit trauma come through so I can do real emergency and massive transfusion releases. Also, I'd like to get someone with some good antibodies so I can go through the process of doing a fun workup.

So yeah. Things are going pretty well right now. Brittany and I are doing a catch up for Helix on Friday, so that will be a nice way to end the week. It's still weird being back in Dallas. Practically everyone I know is married or in a serious relationship or has kids or some combination of the above. Brittany thinks we should venture out and find other people to hang out with but I'm just kind a like "....why tho?" Like... making friends what? I feel like that kind of thing was so much easier in my early 20s when I worked retail with other party kids. But now that I'm in some weird category of "Look, I don't want to hang out with sloppy co-eds at crazy bars but I also don't find the idea of hanging out with married people at the Olive Garden appealing", I'm not entirely sure what to do with myself. All the people I work with are still old (a common problem in labs), plus I'm still just enitrely too damn liberal for the south. It's a problem. But she's insistent that we need to widen our social circle, so if she wants to do the legwork, I will indulge her. For friendship, or something.

This is my daily schedule:

And I am sooooo not a morning person. I am super ready to start my regular shift with my regular hours. I also finally have some complete sets of scrubs (Khaki is not a standardized color, so all the brands are different. Oh yeah, I have to wear Khaki scrubs. The only plus side to this is that my Orange is the New Black costume is already done for Halloween.

I have a big test next weekend and it will be my first time taking my test there so that should be interesting.

My car is wonderful. I'm super in love with it.

This is something I should do, but I've been so legitimately busy that I don't have time. And I'm basically falling asleep now so it's not happening now either.

So I've been applying to pretty much every job I'm even remotely qualified for (including random research positions at RUSH and UT Southwestern) in both Chicago and DFW. I was getting pretty frustrated because I hadn't really heard back, except from a few expected 'no's from facilities that wanted people with like 8 years of experience, etc.

Welp suddenly this week I have 4 interviews. Granted, I just got an e-mail this morning to schedule the 4th, so that might not happen until next week but still. Including one that's supposed to happen on Friday when we're expecting an ice storm.

I had my first interview yesterday, and I think it went pretty well. After the interview they spent an hour showing me around the entire lab and hospital, and I'm not exactly sure they'd do that if they weren't interested. The hospital is a little smaller than what I wanted (it's only ~360 beds), but it's part of a larger system so I'd probably be able to transfer within the company after a while.

The interview today is the one I'm really looking forward to and want the most. It's in the cytogenetics department of a big lab in Chicago. I don't think I'm particularly interested in doing molecular work on a long term basis, but getting some solid molecular experience would be pretty amazing. The only thing about chicago is that I'd have to be making enough to live comfortably. Like, it makes no sense to go and then not have to stay home and drink moonshine out of mason jars. Priorities. I have them.

So I thought my ASCP certification was set to expire on December 31st. My plan for today was to go to the website, figure out how many CE credits I'll get for all my coursework through UC, and then start completing some other CE credits so that could be all squared away.

But, I figured out that it's actually only my membership that expires this year. My certification is still good for another year. Which is awesome because it means just paying ASCP money instead of having to actually do work (which I'm a little too busy for right now because of school. And I didn't want to spend winter break doing it).

So hell yeah. I get to procrastinate for another year!

OP: "a lot of fedora-type dudes don’t actually wear fedoras, you just know them from the way they are. it’s like a personality fedora. an internal fedora"

someone added: "An aura of fedora"

someone else then said: "fedaura"

And idek know why but it legit makes me lol irl every single damn time. like. fedaura!!! I can't.

and all it's reminding me to do is go get my eyes checked next week. I definitely need a new prescription.
Collapse